Edward Thompson’s solo show of large scale prints from his latest work on infrared plates was exhibited at the Ilford gallery in Canterbury.

British documentary photographer, Edward Thompson, uses infrared film to go beyond the limits of the human eye and uncover the invisible. At Ilford Gallery on the night of his show’s private viewing. 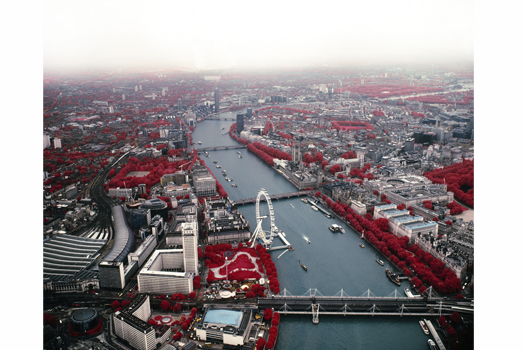 Inspired by the scientific uses of infrared film throughout history The Unseen – An Atlas of Infrared Plates, pushes the purposes and properties of the rarest photographic film on the planet to its scientific and conceptual limits. British documentary photographer, Edward Thompson, set out to explore the boundaries of perception, whether they were things outside our visual spectrum or events that went unnoticed or unreported. From researching the original Kodak advertisements, expert interviews and scientific journals, Thompson has gathered an extensive archive and used some of the last 46 dead-stock rolls of Kodak Aerochrome Infrared film in existence to reveal the unseen.

Ed Thompson had the idea for the process when he was trying to photograph ghosts in Pluckley, Kent – known as themost haunted village in England – for his series in The Village. According to local myth, Pluckley is home to a number of apparitions, with tales of a phantom horse and coach passing through the town, a general who roams the woods, a Gypsy woman who set herself ablaze, and various red and white ladies who appear in St Nicholas’s churchyard.

Edward Thompson’s book, The Unseen: An Atlas of Infrared Plates, is published by Schilt Publishing.